Ex-NHL goalie Rick St Croix is currently a goalie consultant for the Winnipeg Jets and has also worked as a coach for the Toronto Maple Leafs and Dallas Stars.

“When I worked with Eddie Belfour, he was the best goalie in the world. And first off, I didn’t teach Eddie anything. Here’s what happened, the second day I was in Dallas, Ken Hitchcock brought me in. He said, listen, we just signed Eddie…. (Click header to read more)

We’re all exited about that. We’re paying him something like six million a year and we have you which is great but if we need you to be working with Eddie then we’re in big trouble! We’re paying him all this money because we think he can be the guy for us.

Hitch said we also have these guys here that need work and this is where we want more of your attention. And then he starts mentioning Roman Turek, he mentions Manny Fernandez. A year later then it was Marty Turco. What a stable of goaltenders they had. So I was just surrounded with talent. With Eddie I just found that things in his work habits and how he track pucks and stuff that, for me as a goalie coach, how lucky was I to be able to pick up on that and try to learn from that? And I still do. There’s so many things that he did on the ice that were… I felt he was the best in the world at that time.

With Eddie I sat around and pretty much asked “How’s it going?” Occasionally we would talk on different matters, but it would be always without a doubt that he was in charge. He controlled a lot of things about what was going on around him. Hitch was smart enough to identify that he could do that without losing his team, and Eddie rewarded him. He was onboard the whole way and played like a champion goalie that he was. That was a great opportunity to be with Dallas those years.

I have a funny story too. Early in that opportunity to work with him I get out to do some drills and I asked him if he has something in mind that you want to work on? And he said sure. I’m thinking, ‘Wow, I’m going to get some drills here’. This is going to be awesome. So we get the puck set up, he gets one shooter over in the top of the circle one side and same on the other side. He said, okay, tell Nieuwendyk to shoot, and then go tell the other guy, I forget who it was on the other side, to shoot from there. “Yeah, what else?” I say. He says “No, that’s good. Just have them shoot there and then I’ll move over here and then have him shoot there.” And I’m thinking okay, he’s really pulling my leg here. And then he goes, “Now, have Newy pass it over to the other guy.” I’m like, “Oh, it’s a cross shot drill” Now we’re really getting into this. But the beauty of that was sometimes we have these drills that are so layered with this, this, this, this, that you don’t need it. Just keep it simple. There was an example. All he wanted was that, and that, and that. 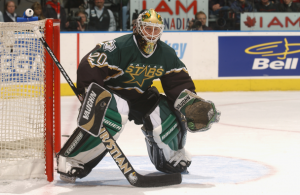 So then a couple days later I give him some of my drills. And he goes in and he’s doing it, and my drill had all these different shots. One for the point, top of the circle, one from the corner out to both sides and a drill with a breakaway, so seven shots total. Okay, well that’s way more ideas to think about as a process. That’s a great drill. But he does it. The next day he goes, “I can barely move. I am so stiff.” So I’m thinking, you should see my other drills if you thought that was tough! So anyway, it just taught me that simplicity sometimes is very, very important and it doesn’t have to be such a trying drill. It can be an easier type drill that they just experience the feeling of success doing something easy, but it incorporates the purpose.

What made Eddie so great, in my opinion, was his positioning because the way he tracked pucks was so phenomenal. Eddie the Eagle was very appropriate, because he followed the puck like an eagle. He would know where pucks were going before they got there. His anticipation, sort of like (Martin) Brodeur, was amazing-great anticipation of the game. So to me it was his tracking skills, getting to his spot. He knew what was going on. He was so smart.”