Read an excerpt from our Laurie Boschman POD

“I was a first round draft pick in 1979 by the Toronto Maple Leafs, ninth overall, and I had a very good first year. As that second season went on I had this emptiness that was very prevalent, even though I was 19 and in the NHL. I was making good money back in the day, it was six figures. Had a car, had a cottage, all that kind of stuff, and yet I wasn’t happy.

I had a teammate on my team by the name of Ron Ellis. There was something different, something good about Ron. When I say he had his life together, he was really a consistent individual, both on and off the ice. There was something about his life that really made all of my teammates take notice, and myself as a 19 year old. He told me that he was a born again Christian. Someone who used the Bible as a guide for his life, and I’d never heard that before.

And soon I became a follower of Christ and tried to work on my life. The slow start was still there so internally there was some talk between the coaches and our general manager Punch Imlach at the time that, “Boschman’s got religion, so maybe he’s got a little soft.” So that’s what they’re seeing internally, when it was the furthest thing from the truth.

I was still playing the same way, it’s just that my production wasn’t as good. At the end of that second year there was a lot of rumblings from the management about “What’s wrong with Boschman and how are we going to do fix the problem?” 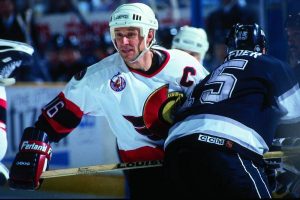 We were playing one night in New York against the Rangers and Harold Ballard, the owner of the hockey club, goes on TV in-between periods and he says that he’s going to trade Boschman or send him to the minors because he’s got too much religion. We flew back from New York to Toronto that night. Our captain Darryl Sittler’s late wife, Wendy, put a note on their door that said, “Darryl, turn on the VCR you need to watch what’s on there”. So Darryl turned the VCR on, watched Harold’s interview.

Darryl came to me in the morning and said, “Bosch, did you hear what happened?” I said, “No, is everything all right with Wendy and the kids?” And he said, “Yup.” And then he told me what happened. He said, “Just get ready to get talk to the media after.” So of course the media wanted to find out what my reaction was to the owner saying they’re going to trade me or send me to the minors because I’ve got too much religion. Basically what I said to the media as a 20-year-old kid at the time, I said, I think it’s Mr. Ballard’s ignorance towards Christianity that he’d make such a statement. Of course the media picked up on that and there was lots of press coverage with regards to “what does it mean to be a born again Christian?” “Can you be a born again Christian and play a physical game like hockey?” All of those kinds of things.

It wasn’t long before I was traded I was to the Oilers. My only regret obviously was I got traded to Edmonton and then to Winnipeg the next year, and I got traded the year before the Oilers won their first Cup. So I never got a chance to win on a Stanley Cup champion team. Of course they had a stud of a lineup with Gretzky, Messier, Kurri, Anderson and all those guys. They had seven or eight players from that team that are hall of famers. They had just been an incredible hockey team. But I got to play against them for the next seven years in the Smythe division which was kind of painful!

The religion thing kind of followed me through my career. I was quite fine with that because I wasn’t shy about the fact that my faith had made a big difference in my life, off the ice and I believe, on the ice. It helped me prepare and helped me be the person I am today. So I wasn’t afraid or ashamed or anything like that of it, but obviously there were some people in hockey that were quite shy or suspicious of it making you soft or maybe it would be a divisive thing, all of those kinds of things. So I kind of dealt with all that through the 14 years that I played hockey. It’s part of what we deal with today, although it’s totally different now. There’s much more openness and acceptance.

It just kind of shows where and how far things have come today, where all of a sudden if something’s a little offsides, if you’re playing not well the fact that you’d attribute that to somebody’s faith seems rather dumb.

There was a lot of internal strife between Harold Ballard the owner and Punch Imlach the general manager back then and all of us as players because they really tried to push the dial back to the ‘60s. Punch was the last general manager when the team won in 1967. One of the things he tried to do was take the ping pong table out so the players couldn’t have a ping pong table. It’s kind of like, why would you do that? And it’s just because his reasoning was, we didn’t have on ’67 when we last won the Cup so we’re not going to have one now.